Well this was by far the most challenging thing that I have attempted.  Not everything went according to plan before the race, the race conditions were not exactly friendly, and it was by far the longest race I have ever attempted so here goes a race and product review along with a botched attempt at going farther, well I went the farthest I ever have but not as far as I wanted.

Christmas in July is a really fun event to go to, they have multiple events: a fun run, 5k, 10k, 6 Hour, 12 Hour, 24 Hour and the locals and event organizers really made the 12 hours I ran entertaining, that is for sure.  They had the whole course decorated with lights, inflatables, and other Christmas themed decorations.  The locals literally are there just as long as you are still running never giving way to fatigue to make sure you keep moving, especially this one girl, no idea who she was but she seemed to be there every lap to give every single runner a high five or fist bump. Then there was food, it was great especially the late night pizza and the early morning pancakes and bacon, oooooooh bacon!  Then there is the course, the ultra course is the only one I touched, but it was just under 1 mile.  1 mile does sound intimidating to do for 24 hours but the course is rolling, winding, and easy to get lost in your thoughts in.  With all that said, this is a tough ultra for the simple fact it is on asphalt, so no soft trails for easy running, you will feel every step after a while. 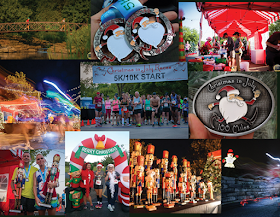 The awards I thought were one of the most appealing things about this race, giant nutcrackers, belt buckles for clearing 100 miles, and very well made finisher medals.

So I guess on to my experience for the event!....!  It started off as any other event except for I got up a little earlier than usual thanks to my 1 year old, well the time was about 6:30 am.  Was all packed up and ready to go by noon, but had to do a little running around to make sure the house would survive while I was gone.  3 pm, I get out the door for my 3.5 hour drive, plus going back across timelines, I figured I was going to get a good nap, man I was wrong!  Nice drive for about the first 1.5 hours, then it all stops, literally.  I heard over the radio that there had been a possible tornado touchdown about 18 miles up the road, and apparently everyone else heard it, because cars were piled under the next underpass and traffic was at a dead halt.  About that time we started getting beat by hail, so I just kept my eyes open, eventually we started moving, but were at a dead crawl for I don't even know how long, all I know is I pulled into the park at 9 pm their time, and the race started at 10pm, when I was planning to be there at 6 pm their time, so no nap for me.

So I start running, get one lap down, and I start into a comfortable running pace, a little slower than my normal easy run pace. After about 5 miles or so, I catch up with the lead girl, who took off at the start, she told me she was last years winner.  We decided to stay together probably for the next 5 or so miles.  She backed off a little bit and I decided to try and hold pace a little longer, thinking to get some good miles in during the cool night, which if I would have known the rain was going to hit I would waited till then to try and hammer miles down since it was currently around 80 degrees.  I felt great honestly until around the 5 mile mark, which I think I may have still been leading, but I got tired and I got tired fast.  Every lap was worse and worse, I was literally waking up while still running.  I really got worried so I stopped and talked to a volunteer and they offered me a place to nap for a little bit and informed me there was no time limit in between laps, so I napped for close to 2 hours. 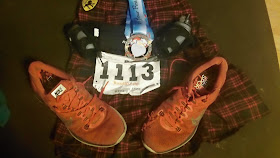 Just shy of the 7 hour mark, I woke up and I knew I had cleared the 30 mile mark before the nap so I still felt okay about possibly breaking 100 miles.  As I got back to running, I felt great!  I put down 5 or 6 solid miles, then the sun started coming up, so I started getting a little conservative, because I knew it was about to get hot.  I got to the probably 10 hour mark and fatigue from lack of sleep the day before hit me again, so I found a random bench on the course and passed out, many of the participants were worried about me and kept waking me up, I had to inform them that I had been awake for 14+ hours before the race and that I was just resting for a little bit.  After I got up, not sure where I was on time scale or anything.  I ran maybe two more laps, then calmed down and just walked a few laps while talking to some of the others going through the sufferfest with me to conquer a few more miles.  At the 12 hour and 40 minute mark, I was told I could check with the Race Director and find out my lap count, I checked it and I was at 44 laps and 42 miles.  I thought about for a few minutes and decided to pull out at this point.  With state I was in and how hot it was, 110 heat index, there was no way I was going to hit 100 miles. 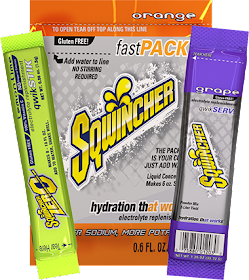 Sqwincher was really nice and set me up with most of my refueling needs.  Sqwincher Sqweeze Pops which if you know anything about me while I am running, I absolutely love popsicles while I am putting down some serious miles.  They also sent me Sqwincher Single Serve stick packs, which were great, because unlike some stick packs they mix perfectly with 20 oz of water instead or 8 or 12 oz like other similar products.  I used their products for all my hydration needs this race and absolutely loved them.  Way better than gatorade, because they kept my stomach calm and the flavors are so much more intense, they wake you up when you get into that endurance trance. 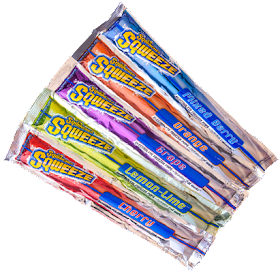 My training for this week, it is going to be reverse taper so I can get back up to full speed next week: